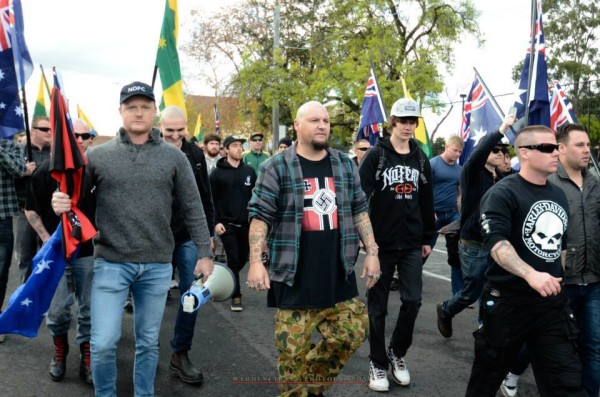 In a letter written on March 19, 1944, Ayn Rand remarked: “Fascism, Nazism, Communism and Socialism are only superficial variations of the same monstrous theme—collectivism.” Rand would later expand on this insight in various articles, most notably in two of her lectures at the Ford Hall Forum in Boston: “The Fascist New Frontier” (Dec. 16, 1962, published as a booklet by the Nathaniel Branden Institute in 1963); and “The New Fascism: Rule by Consensus” (April 18, 1965, published as Chapter 20 in Capitalism: The Unknown Ideal [CUI] by New American Library in 1967).

Rand knew better than to accept the traditional left-right dichotomy between socialism (or communism) and fascism, according to which socialism is the extreme version of left-ideology and fascism is the extreme version of right-ideology (i.e., capitalism). Indeed, in The Ayn Rand Letter (Nov. 8, 1971) she characterized fascism as “socialism for big business.” Both are variants of statism, in contrast to a free country based on individual rights and laissez-faire capitalism. As Rand put it in “Conservativism: An Obituary” (CUI, Chapter 19):

The placement of socialism and fascism at opposite ends of a political spectrum serves a nefarious purpose, according to Rand. It serves to buttress the case that we must avoid “extremism” and choose the sensible middle course of a “mixed economy.” Quoting from “‘Extremism,’ Or The Art of Smearing” (CUI, Chapter 17):

In both of her major articles on fascism (cited above) Rand distinguished between fascism and socialism by noting a rather technical (and ultimately inconsequential) difference in their approaches to private property. Here is the relevant passage from “The New Fascism: Rule by Consensus”:

Observe that both “socialism” and “fascism” involve the issue of property rights. The right to property is the right of use and disposal. Observe the difference in those two theories: socialism negates private property rights altogether, and advocates “the vesting of ownership and control” in the community as a whole, i.e., in the state; fascism leaves ownership in the hands of private individuals, but transfers control of the property to the government.

In this respect, socialism is the more honest of the two theories. I say “more honest,” not “better”—because, in practice, there is no difference between them: both come from the same collectivist-statist principle, both negate individual rights and subordinate the individual to the collective, both deliver the livelihood and the lives of the citizens into the power of an omnipotent government —and the differences between them are only a matter of time, degree, and superficial detail, such as the choice of slogans by which the rulers delude their enslaved subjects.

Contrary to many conservative commentators during the 1960s, Rand maintained that America was drifting toward fascism, not socialism, and that this descent was virtually inevitable in a mixed economy. “A mixed economy is an explosive, untenable mixture of two opposite elements,” freedom and statism, “which cannot remain stable, but must ultimately go one way or the other” (“‘Extremism,’ or The Art of Smearing”). Economic controls generate their own problems, and with these problems come demands for additional controls—so either those controls must be abolished or a mixed economy will eventually degenerate into a form of economic dictatorship. Rand conceded that most American advocates of the welfare state “are not socialists, that they never advocated or intended the socialization of private property.” These welfare-statists “want to ‘preserve’ private property” while calling for greater government control over such property. “But that is the fundamental characteristic of fascism.”

A mixed economy is ruled by pressure groups. It is an amoral, institutionalized civil war of special interests and lobbies.

Rand gave us some of the finest analyses of a mixed economy—its premises, implications, and long-range consequences—ever penned by a free-market advocate. In “The New Fascism,” for example, she compared a mixed economy to a system that operates by the law of the jungle, a system in which “no one’s interests are safe, everyone’s interests are on a public auction block, and anything goes for anyone who can get away with it.” A mixed economy divides a country “into an ever-growing number of enemy camps, into economic groups fighting one another for self preservation in an indeterminate mixture of defense and offense.” Although Rand did not invoke Thomas Hobbes in this context, it is safe to say that the economic “chaos” of a mixed economy resembles the Hobbesian war of all against all in a state of nature, a system in which interest groups feel the need to screw others before they get screwed themselves.

A mixed economy is ruled by pressure groups. It is an amoral, institutionalized civil war of special interests and lobbies, all fighting to seize a momentary control of the legislative machinery, to extort some special privilege at one another’s expense by an act of government—i.e., by force.

Of course, Rand never claimed that America had degenerated into full-blown fascism (she held that freedom of speech was a bright line in this respect), but she did believe that the fundamental premise of the “altruist-collectivist” morality—the foundation of all collectivist regimes, including fascism—was accepted and preached by modern liberals and conservatives alike. (Those who mistakenly dub Rand a “conservative” should read “Conservatism: An Obituary” [CUI, Chapter 19], a scathing critique in which she accused conservative leaders of “moral treason.” In some respects Rand detested modern conservatives more than she did modern liberals. She was especially contemptuous of those conservatives who attempted to justify capitalism by appealing to religion or to tradition.) Rand illustrated her point in “The Fascist New Frontier,” a polemical tour de force aimed at President Kennedy and his administration.

There is no such thing as ‘the public interest’ except as the sum of the interests of individual men.

Rand began this 1962 lecture by quoting passages from the 1920 political platform of the German Nazi Party, including demands for “an end to the power of the financial interests,” “profit sharing in big business,” “a broad extension of care for the aged,” the “improvement of public health” by government, “an all-around enlargement of our entire system of public education,” and so forth. All such welfare-state measures, this platform concluded, “can only proceed from within on the foundation of “The Common Good Before the Individual Good.”

Rand had no problem quoting similar proposals and sentiments from President Kennedy and members of his administration, such as Kennedy’s celebrated remark, “And so, my fellow Americans: ask not what America will do for you—ask what you can do for your country.” The particulars of Rand’s speech will come as no surprise to those familiar with her ideas, but I wish to call attention to her final remarks about the meaning of “the public interest.” As used by Kennedy and other politicians, both Democratic and Republican, this fuzzy phrase has little if any meaning, except to indicate that individuals have a duty to sacrifice their interests for the sake of a greater, undefined good, as determined by those who wield the brute force of political power. Rand then stated what she regarded as the only coherent meaning of “the public interest.”

[T]here is no such thing as ‘the public interest’ except as the sum of the interests of individual men. And the basic, common interest of all men—all rational men—is freedom. Freedom is the first requirement of “the public interest”—not what men do when they are free, but that they are free. All their achievements rest on that foundation—and cannot exist without them.

The principles of a free, non-coercive social system are the only form of “the public interest.”

I shall conclude this essay on a personal note. Before I began preparing for this essay, I had not read some of the articles quoted above for many, many years. In fact, I had not read some of the material since my college days 45 years ago. I therefore approached my new readings with a certain amount of trepidation. I liked the articles when I first read them, but would they stand the test of time? Would Rand’s insights and arguments appear commonplace, even hackneyed, with the passage of so much time? Well, I was pleasantly surprised. Rand was exactly on point on many issues. Indeed, if we substitute “President Obama,” for “President Kennedy” or “President Johnson” many of her points would be even more pertinent today than they were during the 1960s. Unfortunately, the ideological sewer of American politics has become even more foul today than it was in Rand’s day, but Rand did what she could to reverse the trend, and one person can only do so much. And no one can say that she didn’t warn us.

This article was originally published on FEE.org. Read the original article.

A document covered with good intentions and proclamations, signed by men of questionable character, is incapable of restraining the avarice of a government. View all posts by Brad Slusher